We've thrown down the gauntlet at Golem to build armies for 40K6 at a rate of 250 points a month.  Curis's picked Squats - particularly apt as they're name-checked in the new 40K6 rulebook.

First up is the Furnace Valley Brotherhood Command Squad.  Brotherhood Lords are in charge of their Stronghold at a tactical level, leading the Warrior Squads in the thick of the fighting.  They're one step below Warlords who I'll model later in the project with ornate carapace armour.   On the left is Commissar Gustav (kindly donated by Luke), who is acting in an advisory rather than disciplinary capacity.  This Mark Copplestone classic is the only non-Perry miniature so far.  The Powerfist and Power Sword is quite overkill, but the model's too damn awesome to kit out otherwise. The first Warrior Squad is composed entirely of Perry-sculpted Squats.  Curis picked all the models with photochromatic visors as the translucent red looks gives the squad a visual kick, and also satisifes his pedantic side where in Rogue Trader squads were either entirely with or entirely without the eye protection. 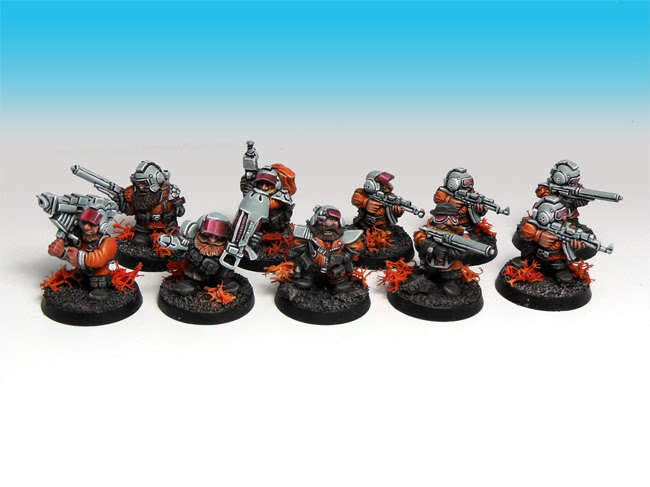 Curis'd have liked to've avoided using the metal/plastic hybrid Squats in this squad (and make squads of entirely hybrids later) - but the Plasma Gunner is festooned with Heavy Bolter pouches and Curis has no oldskool Heavy Bolters from White Dwarf 97.  He'll split the squad up later - and might even split off the Squats with AK47s from the Lasguns.

Here's the whole 250 points altogether.  It's a nice nucleus to grow the army around.